Thanks to Marco Gastoni and Bruce Scholten, the “Internazionale”, instant comic written and drawn live from the International Anarchist Meeting held in St Imier Switzerland from the 8th to the 12th August 2012 by Marco Gastoni, Nicola Gobbi and Jacopo Frey, has been adapted for the English language: 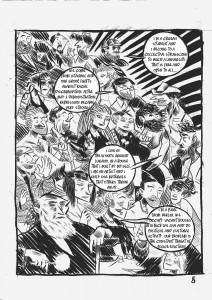 The cartoon was originally published in French language during the meeting in three issues, respectively, explaining the origins of the First International, the conclusions of the first anarchist congress in history, held in St. Imier in 1872, and the spirit of what happened in the meeting of 2012. Then we produced a booklet version in Italian containing all the tables (here).

We want to thank all the people who have helped us both in St Imier, during production of
the comic, and also subsequently for the adaptations and translations.

The comic can be downloaded free of charge in all languages available so far on
this blog and is currently being translated in many countries of the world.

For any communication and publishing please write to: mala.testa@bruttocarattere.org

You are free to print this comic in its entirety and to spread it on subscription to fund libertarian initiatives.